The continent of South America offers scope for a whole variety of cruises, giving travellers rewarding experiences. Its diverse variety of cultures and landscapes will ensure a holiday to be remembered.

Different cruise operators offer many different itineraries. In general, cruises limit themselves to either South America’s east (Atlantic) coast, or to the west (Pacific) coast, although longer cruises are available that circumnavigate the continent. There are many exciting places on each coastline, so deciding on east or west can be a difficult decision.

Many cruise ships operate along the 5,000 mile coast of South America’s biggest country, Brazil. These invariably call into the exotic city of Rio de Janeiro, a delightful and exciting place to stop over on a South American cruise. It is famed for Copacabana Beach, Christ the Redeemer statue which overlooks the metropolis, Sugarloaf Mountain, and of course the world famous Rio Carnival. Another not-to-missed cruise highlight is the famed “Paris of the South”, Buenos Aires, the capital of Argentina.

Further north along the east coast, it is possible for cruise ships to venture 1,000 miles up the mighty Amazon River to the inland port of Manaus. Its location has not stopped Manaus developing into a city of almost two million with a thriving tourist trade. Among its many attractions is the Archipelago of Anavilhanas, where visitors can view monkeys in trees, beautifully coloured parrots and pink river dolphins in their natural habitat. The more intrepid tourist can also engage in some tropical tree climbing.

Halfway along the Amazon, near the town of Santarem, is the river beach resort of Alta do Chao. Here the visitor is treated to tropical forests and small villages while relaxing in the sun on the delightful white sandy beach.

Along the east coast of South America, the rich variety of landscapes is demonstrated by the Chilean fjords, one of the most startling cruise environments in this part of the world. The fjords are located on Chile’s southern stretch of coast.

Other cruise locations on the continent’s Pacific coast include Peru and the Galapagos Islands. The main Peruvian port and capital city, Lima, is famous for its colonial architecture from the Spanish era. It is also a base for trips to the Sacred Valley of the Incas and the ruins of ancient Inca capital Machu Picchu, over 7,000 ft up in the Andes. A visit to these ancient sites, as a cruise excursion, is an amazing experience.

Most cruise lines operate their South America itineraries in the southern summer (October- March). Many of the cruises commence from North American ports, although some can be found that start in South America. For UK travellers, there are packages available that include return flights from Britain.

Durations will range from 7 day coastal cruises, to 14 day circumnavigation cruises via Cape Horn, through to more extensive cruises that commence from more distant ports in North America or even Europe. 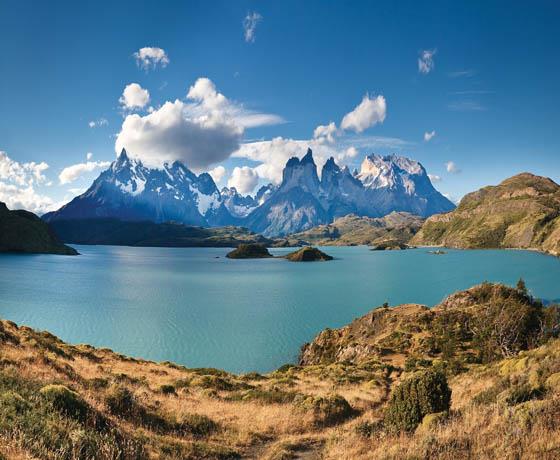