Antarctica is one of the most remote and beautiful places on the planet and visitors encountering its snowy wastes should be prepared for some of the most spectacular views they will ever see.

This isolated region is increasingly on the cruise ship itinerary, many of which provide experienced guides who will be able to talk about the many beautiful natural sights. It is important for travelers to remember that there are only four months when it is possible to navigate a ship through the Wedell Sea, so plans should be made accordingly. December to May is considered to be the best months for taking an Antarctic cruise.

The inhabitants of Antarctica consist of international scientists carrying out vital research into climate change and the environment. Magnificent icebergs and glaciers surround the continent.

Since Antarctica is unlike any of the more mainstream tourist destinations visitors must be prepared to listen to their guides and follow their instructions to the letter should they be allowed to disembark. The Falkland Islands in the South Atlantic are included in many of the Antarctic cruise itineraries as they represent the closest inhabited landmass to the continent.

To discover more about the region, visit the Port Lockroy museum that is situated on Goudier Island and is now dedicated to the history of Antarctic exploration. Gentoo penguins live on this island.

For those who enjoy bird watching, this region is home to the Emperor Penguin. This dramatic bird, with its crested bright yellow head, spends its whole life enduring the very low-temperature drops that prevail here. Other species of penguin also proliferate, including the smaller Adelie penguins that live on Paulet Island.

The Albatross lives in Antarctica and visitors will be able to spot the Sooty Albatross, the Black Browed Albatross as well as a vast array of Petrels. Whales can often be spotted here, including the massive Blue Whale and packs of Orcas or ‘Killer Whales.’ The other animal to look out for is the seal. Most of these creatures use the Weddell Sea as their playground and visitors can expect to see the Leopard Seal, so named due to its spotted coat, the mysteriously named Crabeater seal, that actually lives off krill rather than crabs as well as the Antarctic Fur seal, which is finally prospering following uncontrolled hunting for its luxurious pelt in the early part of the 20th century.

Most recently famous for the war between the UK and Argentina, the Falkland Islands can offer the visitor many attractions on their way to Antarctica and are included in most cruise itineraries. The islands’ capital, Port Stanley, is the starting point for golf excursions, fishing trips or some superb walks that take in the islands’ stunning scenery. The best time to visit is between December and May, as the South Atlantic can get cold in the winter. There are many companies in Port Stanley that offer water sports, including water skiing and surfing, beware, if you do go surfing, as you may well find that you are sharing your experience with inquisitive local dolphins. 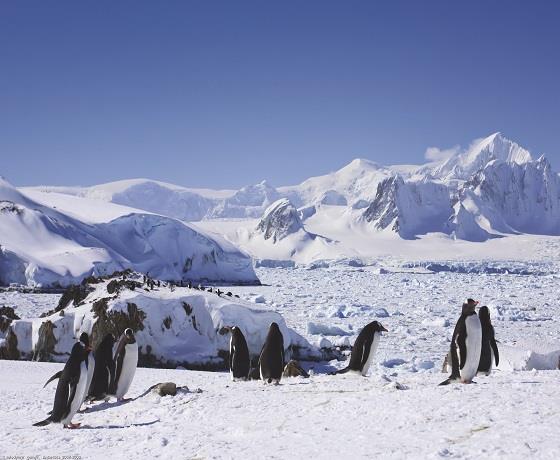